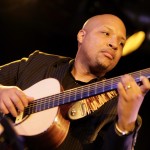 Fontaine Burnett’s first exposure to music came at an early age. His father, (a saxophonist who played in the Kansas City traditions of Jazz, Blues and R&B ) gave him his first opportunity to delve into musical expression. His earliest musical experiences involved many joyful hours singing with his family and listening to the sounds of his father’s multi-faceted record collection. He also benefit from his fathers many musician friends that often filled the house. It wasn’t long before he had also begun with his first instrument; naturally, the saxophone. Fontaine passed quickly from the saxophone to the bass where he began his career as a professional musician. First he performed with his father, but soon found himself in demand as a clubbing musician, (even if he wasn’t old enough to get into most clubs). The years progressed and Fontaine progressed with them by continually searching for knowledge and better possibilities for creative expression. This led him to add the keyboard, guitar and percussion to his bag of musical tricks. He also began his formal music training by accepting a scholarship to the University of Denver’s Lamont School of Music. There, he studied Contrabass and Musical Composition. He had many opportunities to perform and exchange musical knowledge with world class musicians, but he felt that perhaps there was more to the world than the academic confines of the conservatory. A job offer as studio engineer in the sun-filled land of Italy was exactly the opportunity the young musician needed to get himself to Europe. One thing led to another and soon he found himself performing with local and national acts and leading his own groups. He enjoyed a moderate level of success there but wanderlust took him once again on the road, this time up north to Germany. In the years since his move to Germany, Fontaine has expanded his resume’ to include many national and international acts both on stage and in the studio. In addition to this, the grounding of his family which is a constant resource of inspiration and strength. His commitment to versatility and the “vibe” will hopefully assure him many more successful collaborations in the future. Versatility is the cornerstone of Fontaine’s musical philosophy. He lives by the words of the great American composer Duke Ellington who said: “There are only two kinds of music…good and bad!”. This open attitude toward the multi-faceted spirits of music has rewarded him with many opportunities to work and perform with a wide variety of musicians of diverse backgrounds. From the world of Jazz and Classical to Hard Rock and Hip Hop Fontaine brings it all together with one word…”vibe”.

He already played with musicans like Marla Glen, Chaka Khan, The Temptations, Orange Blue, Max Herre, Gentelman and many more…