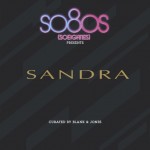 SANDRA, who can look back at 30 years of success in the music business, is truly one of Germany ́s biggest pop stars ever. With over 30 million records sold, SANDRA has nothing to prove anymore and is still immensely popular with her fan base. Now she steps back in the spotlight and it will a busy year for her. First, in April, the exclusive collection so8os – so eighties will be released with all her 12″ singles from the 80s remastered from the original master tapes on an extensive 2 CD box. Then in May the brand new single Maybe Tonight will be released worldwide. But let ́s tell the story step by step: over two years ago SANDRA and Blank & Jones crossed paths for the first time. After a meeting at a TV show they decided to jam at her studio on Ibiza in early summer 2010. The vibe was right and Blank & Jones came up with a plan for new recordings. The idea was to go back to the roots. Back to the eighties. They called up Hubert Kah who was responsible for co-writing some of her biggest hits like Maria Magdalena and In The Heat Of The Night plus he always sang the male counterpart on most of her songs in her early period. The team was completed with SANDRA ́s long time friend Jens Gad as songwriter and vocal engineer.
In the meantime Blank & Jones complied so8os Artist-Editions for names like Ultravox, OMD and Heaven 17 which became a great success. As all participants had a busy schedule with their careers and productions, it all took its time. But now finally in 2012 a brand new SANDRA song is ready to conquer the pop world again. Produced by Blank & Jones, written by Jens Gad, sung by the unbeatable team of SANDRA on lead vocals and Hubert Kah as male support voice. Before the song hits the streets on 11th May with a full range of 80s style mixes like Extended and Dub Versions, it is time to celebrate the legendary Original 12″ Mixes between 1985 and 1989.
Blank & Jones went deep into the archives and with the help of a lot of dedicated SANDRA fans they made a list with the most collectable B-Sides, rare mixes and of course all extended versions. For the first time they were able to trace down the original Master-Tapes and restored them with the best technology for this release. The final tracklisting is a true highlight for all SANDRA fans and sets a new level of standard.

Enjoy the perfect pop of the “old” and the “new” SANDRA! 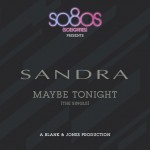