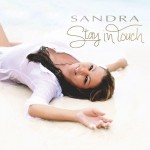 29th August 2012, Cologne, Germany: SANDRA, who can look back at an over 30 year long musical career, is with over 30 million records sold truly one of Germany’s biggest pop stars ever. With her amazing chart performance of 9 albums and 28 singles she is certainly playing in the same league as pop icons like Madonna, Kylie Minogue and Mariah Carey in Europe and is still – especially with her fans – immensely popular. On October 26th EMI will release her new Album “Stay In Touch” worldwide. It is produced by Blank & Jones who were also responsible for the A&R of this concept album. The songwriting was provided by Jens Gad and Hubert Kah. Hubert Kah also rejoins SANDRA for the first time since their massive success in the 80s (he provided all male vocal parts and many compositions for her hits) with all additional and backing vocals. The whole concept was developed by Blank & Jones within the last two years and focuses on SANDRA‘s musical roots in the mid 80s.

“We wanted to bring back the magic of hits like “Maria Magdalena” and “In The Heat Of The Night” Blank & Jones explain “The first step was to bring Hubert Kah back to the team because SANDRA and Hubert are simply unbeatable behind the microphone together.“ Moving on with the process, Jens Gad, SANDRA‘s long term musical companion got involved with the songwriting. Blank & Jones: “Jens in not only incredibly talented when it comes to writing great pop tunes, he also understood immediately the 80s idea and delivered exactly what was needed.”

After the release of “Maybe Tonight” by this team to celebrate SANDRA‘s 50th birthday in May, everyone was passionate about the collaboration and wanted to keep going. Also the fans were very excited about the musical direction. It is mainly due to EMIs Manfred Rolef that SANDRA releases this album with Virgin/EMI after a 28 year relationship between the artist and the company, as he had the idea to bring SANDRA together with Blank & Jones. After Rolef extended the so8os [so eighties] compilation brand with Blank & Jones to artist editions for Ultravox, Heaven 17, OMD, etc. he knew about their passion for the 80s.

Blank & Jones themselves have a great record of 80s icons who they worked with over the years: Starting with Robert Smith (The Cure), Bernard Sumner (New Order), continuing with the Pet Shop Boys, Martin Fry (ABC) or Anne Clark and just currently working with Boy George for their latest studio album RELAX 7. Rolef reflects: “It was just a perfect fit. Blank & Jones had worked with Hubert Kah every now and then since 2003 and SANDRA was looking for some fresh input. We organized a meeting in her Studio on Ibiza and the first Demo recording already had that special magic!” German EMI Chairman Wolfgang Hanebrink states: “We are proud to accompany SANDRA in her career for such a long time and are very excited about this new creative team.”

Of course this album is also very special for SANDRA: “I had the right gut feeling from the very first moment for this project. I am fascinated with how much passion Blank & Jones recreate this 80s atmosphere and whole attitude to life by using the Original Sounds. When I listen to the new songs, I find myself on this fantastic trip through time which I am enjoying in full effect.” With pride the 50 year young singer balances: “My 10th studio album reminds me of the first and most successful one. The circle is closing, also musically – thanks to the inspiring work with Blank & Jones“

SANDRA‘s manager and husband Olaf Menges put full priority on the realization of the recordings: “We wanted to do this album by all means, even if we had to put up with a long production process as all involved parties are very successful in their own right. It certainly is SANDRA‘s strongest album for over 15 years.”

Her new album “Stay In Touch” will also be available as 2-CD Deluxe Version, including extended versions of selected album tracks. The support single for the album will be “Infinite Kiss” and will be delivered to Radio Stations worldwide in October. There will also be a special music Video available soon.