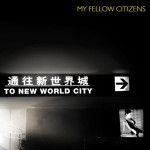 Dear my fellow citizens! MY FELLOW CITIZENS? Artists from Germany? Yes, this is absolutely right, mate. Two guys, who really love the particular conditions of exciting electronic music and hate mediocrity: They are producers, audio-visual artists and music lovers, a good team with a big bunch of extra ideas, composed and especially selected for their debut album TO NEW WORLD CITY. My Fellow Citizens met each other 2000, somewhere in the north of Europe, sometime in a cab or was it some kind of bus? Anyway, someday later one of the guys sat in the back seat of this vehicle as they drove out into busy suburbs together, looking at the people in the streets, looking at the houses that they passed in the bright light of autumn. There was this special feeling it would be nothing or no one new here. Summers and winters would pass by and these houses and streets would know them. Suddenly he looked at his little wrist watch and shouted at the other guy: „I want to ask something.“ „What‘s that honey?“ „I don‘t believe that you‘ll have anything at home to go back to, right? So shall we go the way To New World City? Two freaks on the same trip. This sounds good to me!“ „You‘re wearing the same outfit that you wore the first time we have met.“ „That‘ s why.“ Since crossing the equator, something like eighty miles down the bay, twelve miles out, and say two months, 14 days, 11 hours and 50 minutes after they cast off from there it had been their habit to surface once in every watch to get the maximum antenna height and to listen to any sophisticated and exciting music transmission. „Leave this habit? Leave the way To New World City? No, we won‘t leave it. Dear my fellow citizens!“