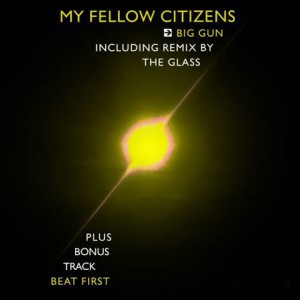 2010 is most definitely the year for German duo MY FELLOW CITIZENS. Their highly acclaimed debut album was released in May. TO NEW WORLD CITY comes around quite stringent and with a fine playfulness at the same time. Their first single PROGRAM DISK was remixed by electronic music top stars GUSGUS and easily hit TOP 30 in the German Club Charts. The islandic trio remixed the song while Eyjafjallajökull erupted – so the remix name says it all really! And please take time to watch the smart video. The two jaunty citizens were just featured by super Franco-German television music magazine ARTE TRACKS. Nothing astonishing when you look at their witty outfit besides their brilliantly trimmed soundscapes. And now BIG GUN follows as a second single. A decent reminiscence to late eighties House classics. BIG GUN is a verily weapon for long and sweaty club nights and nobody else than the cool New York duo THE GLASS provided a truly daring remix. The single is completed by the bonus track BEAT FIRST. A fine frenzy and quite different club banger. Enjoy!