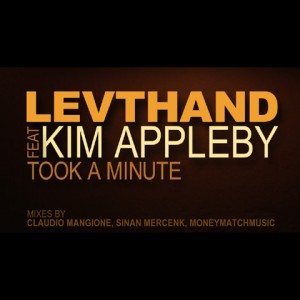 Following up from the highly infectious Cadillac Track (# 148 german airplaycharts and # 32 formatcharts mainstream). Took A Minute is the second offering from LEVTHAND’s Album Taxidrive. Co-written with KIM APPLEBY of Mel and Kim fame, who in the late 80’s with her sister Mel, were conquering the top 10 around Europe as well as having international success. Notching up 2 number ones in the American dance charts as well as crossing over into the Billboard charts, the album F.L.M. was to spawn 4 top 10 hits. The classic Respectable was number one in almost every territory in the world. The album F.L.M. went on to sell 3 and half million records worldwide. LEVTHAND aka Levent Canseven and Kim met back in 2000 when Can7 was in London doing a gig. They exchanged numbers with a promise that one-day they would write together. Eventually over time Kim would go back and forth to Cologne/Germany and spend many a late night writing tracks with Levent in his studio. A deep friendship developed and many songs were written (some are still yet to be released). From these sessions was to come Took A Minute. A melancholy song with an up-lifting chorus that tells a story of how life can change in an instant… It just takes one good thing to happen! LEVTHAND then went on to give it his personal touch, production wise and the result is a feel good pop song that inspires! Along with the original version comes 6 strong mixes both aimed at Radio- and Club-land. LEVTHAND sets the pace with his “Lovers Fox Mix” along with his DJ/Producer colleges CLAUDIO MANGIONE and SINAN MERCENK aiming their mixes at the advanced dance floor. Both are available in special edit versions. Then last but not least are the two impeccable MONEYMATCHMUSIC mixes that caters for those who prefer their beats a little to the left.. Or should that be LEVT! No doubt LEVTHAND is here to stay, as this second track taken from “Taxidrive“ will surly not be the last. Buckle up and enjoy the ride!