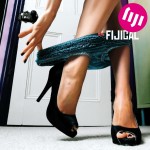 Love is once again something you can enjoy: in “Fun Factory” Fiji hammer us the brain out of the skull. In the last two years somewhere between show-stage and sound-studio, the trio from Bern has cut into place a handful of new dance floor diamonds. Co-producer Ian Little (Roxy Music, Duran Duran) and the Young Gods mixer Bertrand Siffert have added their part in the third Fiji album. “Fun Factory” offers dance fans a synthy sound without detours nor compromises. And with proper sex appeal. The night wears fishnet tights and the moon is a disco mirror ball. And the morning after a wicked story, that perhaps will never come true. At least not until Fiji thrash their electro-pop out of the loudspeakers. That’s what they did in the recent past at over 50 concerts per year. Sometimes even in such renowned premises as the Miles Davis Hall at the Montreux Jazz Festival. On that occasion in 2008 Fiji shook the front of the building, together with Santogold and Madness. And proper madness they rouse on every stage from which they fire their sound bombshells. At the almost home game at the Gurtenfestival, the Zürcher Kaufleuten, the M4Music Festival, the Münchner Muffathalle, the Swiss Beach in Vienna and the 4cento in Milan. Or as support band of the Belgian indielectro-clasher Vive La Fète, which invited Fiji to join their Swiss Tour 2007 on the spot. Fiji are a trio from Bern with a sound made for the world – with two brothers Menk and Simon Schüttel at the bass and at the keyboards and a multilingual vamp at the front: Simone De Lorenzi stands in the footlights half way between a dance-floor queen and a Tarantino muse. Accompanied by reverberating beats for the long night in a miniskirt. With legs reaching as far as Venice and the look of Audrey Hepburn. With songs that order a drink in French. White wine, sprinkled. Sour. And then she sucks the juice out on the lemon slice, without a wince of the gently fluttering eyelashes. Fiji refined Fun Factory by mastering the album at the legendary Abbey Road Studios in London. Inside those sacred walls they gave birth to concentrated rock’n’roll for love-disco – and everything that comes afterwards. Because, in case someone has forgotten it: love is more than an alibi against loneliness. Love means pleasure. Even when it vanishes with the crack of dawn. And all the more so in such a moment. And if it lasts a bit longer, no problem: Fiji are pleased to stay for breakfast.