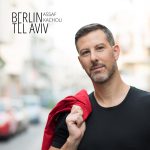 The Berlin Tegel airport is crowded as always. Passengers are waiting to board a flight to Tel Aviv. Assaf Kacholi, who found a home both in Berlin and Tel Aviv is listening to music to pass the time. Assaf has a passion for exploring new music. “I really listen to everything – from all over the world – and I’m always gathering ideas. I can’t listen to music without thinking: I would love to sing that sometime.“ A few minutes later he boards the plane, already absorbed by the sound of a new discovery. His fascination for the German language grew while he was studying Schubert and Schumann Lieder at the Rubin Music Academy in Tel Aviv. Consequently, he decided to move to Berlin in 2002, to pursue further musical training and expand his vocal artistry. During his stay in Berlin Assaf never lost his connection to his Israeli home, and so the Tel Aviv-Berlin route became part of his regular life. Berlin has an art scene that is, on one hand, influenced by a strong German classical music culture and, on the other, strives to create something new and wild. Tel Aviv is the culture of Assaf’s origins, a combination of a modern metropolis and traditional, centuries-old Jewish music.

Two worlds, very different from each other, but both the subject of constant change. “I spend a lot of time on airplanes, because somehow I feel at home in both cities.“ Moving back and forth between the two places makes it difficult for him to put his foot down in either metropolis. “When I’m in Israel, people say I have a German accent. And here in Germany it’s the other way around, even though my German is almost grammatically correct.“ He laughs, but there is a bit of sadness in his voice. “I suddenly noticed that my identity started to dissolve.“ To grapple with and perhaps make peace with this conflict, Assaf launched the Berlin – Tel Aviv project. “It is a search for my identity. It took a lot of energy and courage to make this CD. And it took a long time until I found the confidence to say: These are my songs.“

Assaf finds an answer to this search for his real self in a more reduced musical expression. “I like to sing for people at their homes – maybe thirty or just ten people – it feels so intimate, and my voice really fits that kind of setting.“ That is why the songs are accompanied by a piano or a guitar only. “It is so beautiful to sing with a guitar, it feels like there are two sets of ‘strings’. The guitar and my voice, and then my voice somehow starts to float. “ He calls these little concerts he gives at homes “Salonkonzerte“. He likes to perform for the Jewish community in Germany. In doing so he also discovered his love for Hebrew songs. “I was homesick and missed my own language.” The different languages of the songs inspire his singing and accentuate various traits of his personality. “Singing in German, I become a little ‘deutsch’ too, a little bit contained, with a more delicate emotion. Singing in Hebrew, I’m opening up, I’m more relaxed. A ‘Mediterranean artist’ with an emotional Israeli soul.“

Assaf’s collection includes songs from the classical European canon, vocal music by Baroque composer John Dowland and romantic songs, such as the title song from Franco Zeffirelli’s film Romeo and Juliette, as well as songs with a Jewish cultural background (e.g., the Biblical “Song of Songs“, Sasha Argov’s “Lullaby“). There are also songs by the Jewish-American composer George Gershwin and Kurt Weill who emigrated to the United Sates from Berlin.

Assaf deliberately chose not to produce a downloadable playlist. “It is very important to me that people can hold the CD in their hands.“ The order of the songs is supposed to create an overall connection. “I like to listen to a CD from beginning to end.“ The sequence itself describes Assaf’s search for his personal and cultural heritage and artistic inspiration.

Assaf lands in Tel Aviv. He has made new discoveries and collected ideas for a new project. He smiles with a twinkle in his eye, the Israeli “sunnyboy“, as some of his friends like to call him. Once again he has arrived at one of his homes.